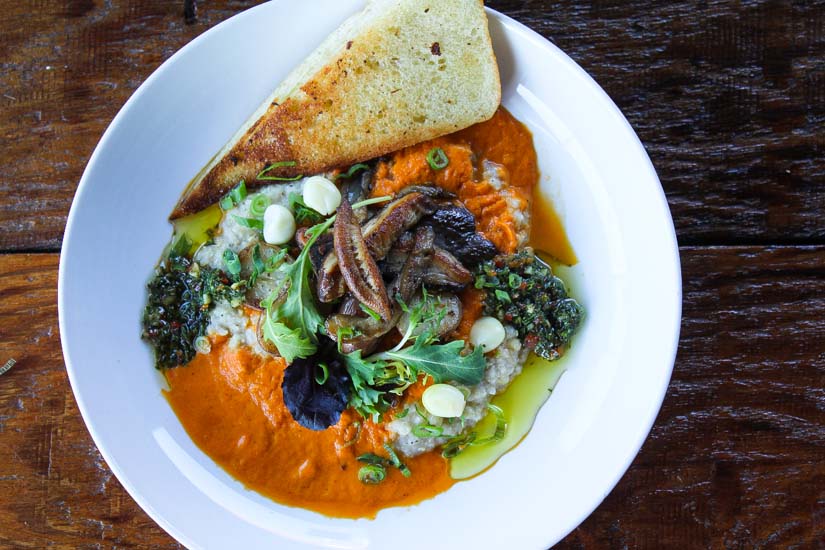 This dish is wonderful for any meal, including breakfast! If you can get your hands on some heirloom corn, I recommend trying it.

Bring 1 cup of water to a boil and cook the quinoa for 15 minutes until all the water is absorbed. Turn off the heat and let stand covered for 5 minutes. Fluff with a fork.
Cook the fresh corn for 3-5 minutes in boiling water, covered until corn is tender. Strain out the corn, reserving the liquid.

Puree the cooked corn and 1 cup of the cooked quinoa in a food processor with a few tablespoons of the corn cooking liquid until smooth. It’s ok to have a few chunks in it! Stir in the coconut milk.

Cook for 15 minutes on low heat in a small sauce pan, add more coconut milk as needed to keep it from becoming too thick.

Preheat the oven to 350 degrees. Toss the whole tomatoes in olive oil and salt. Roast in a baking dish for 25 minutes. Remove and allow to cool. Remove the skins and discard.

Place the whole bell peppers directly onto your stove burner and turn the flame up all the way.
Allow the king of the peppers to blacken completely and soften. Remove from the burners and allow to cool. Rinse with cold water and pull off the blackened skins and seeds from inside the peppers. Make sure to carefully remove all the black parts.

Put the peeled peppers and tomatoes in a blender and puree until smooth. Strain through a colander. Add the paprika, and season with salt and pepper to taste.

In a saute pan, heat the olive oil and sauce the mushrooms, potatoes and garlic until browned. Add the salt and pepper to taste.

Serve the polenta warm topped with the pepper sauce, sautéed potato and mushrooms and the grilled baguette. Garnish with fresh cilantro and micro kale for color. 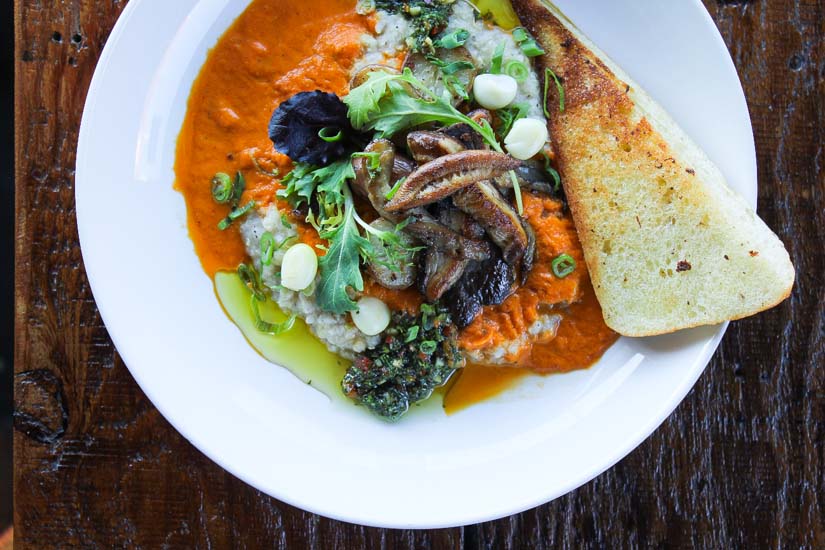